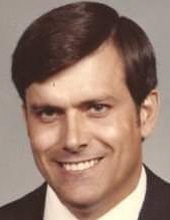 Dr. John Franklin Lindamood, Jr., DVM, age 77, of Sturgis, passed away early Sunday morning January 3, 2021 at Rose Arbor Hospice in Kalamazoo.
He was born December 16, 1943 in Jackson, son of the late John F. and Naomi Louise (Treadwell) Lindamood.
Dr. Lindamood resided in Sturgis since 1974 coming from Grass Lake where he was a graduate of Grass Lake High School with the class of 1962. He furthered his education at Michigan State University where he was a graduate of the School of Veterinarian Medicine with the class or 1968.
On February 20, 1971 he married Sharon Molter at the Trinity Lutheran Church in Sturgis.
John owned and operated the Fawn River Animal Clinic in Sturgis for 47 years.
He was a member of the American Veterinary Medical Association. He enjoyed crossword puzzles, running and biking. For several years he played fast pitch softball with the Orange Machine softball team. He loved animals and always had a special cat.
He is survived by his loving and dedicated wife of nearly 50 years: Sharon; one daughter: Anne (Daniel) Eichorn of Kalamazoo; six grandchildren: Dakota, Carter, Xavier, Sander, Asher and Pyper; one great grandchild: Elliott; one brother: Alan (Kathy) Lindamood of Grass Lake; brother-in-law: John Graves of Jackson and several nieces and nephews.
He was preceded in death by his parents and one sister: Marjory Graves.
In accordance with his wishes cremation has taken place. Due to the current conditions of the COVID-19 pandemic and limitations of gatherings a celebration of the life of Dr. John F. Lindamood, Jr. will be held at a later date to be announced.
The Hackman Family Funeral Homes of Sturgis is entrusted with the arrangements.
The family suggests those wishing to make a memorial donation in Dr. Lindamood’s memory consider the Alzheimer’s Association of America, 225 N. Michigan, Floor 17, Chicago, IL 60601.
The obituary is also at www.hackmanfamilyfuneralhomes.com where we encourage relatives and friends to share memories and leave condolences for the family.