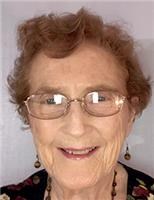 Sharon L. Myers, age 85, of Sturgis, passed away Wednesday, Feb. 3, 2021, at her home.
She was born May 13, 1935, in LaGrange, a daughter of the late William O. and Reva K. (Williams) Brown.
Sharon had been employed at Sturgis, Coldwater, Goshen and LaGrange hospitals over the years in the medical records department.
She was an active member of First Baptist Church in Sturgis.
Surviving are two sons, Douglas (Louann) Pippenger of Detroit Lakes, Minn., and Dennis Pippenger of Santa Monica, Calif.; a daughter, Robin (Gary) Tilden of Sturgis; her life mate, John Butcher, of Sturgis; and several grandchildren and great-grandchildren.
She was preceded in death by her parents; a sister, Freda Penrod; and two brothers, Peter Michael Brown and infant Robert Brown.
According to her wishes, cremation has taken place. A graveside service celebrating her life will be held at a later date, to be announced, in Greenwood Cemetery in LaGrange.