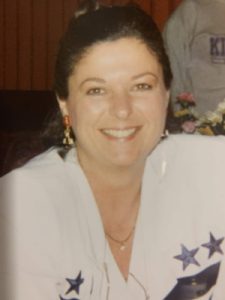 Jane Winans Schauer, age 76, died peacefully in her sleep on Friday, September 17th, 2021 from dementia related complications at home in Three Rivers, where she was cared for by her devoted husband, Dr. Stephen Schauer. Jane was born on March 2nd, 1945 in Dayton, Ohio to Mary Winans (nee Cosler) and Dr. Theodore Winans. Jane attended Fairborn High School, where she sang in the choir, danced in theater productions, was a majorette, and was elected prom queen. She then attended Miami University where she graduated with a B.A. in education and after graduation taught second grade before starting a family.

The love story of Jane and her husband Steve began long before their nuptials, dating back to when they were in preschool, where Steve tried to kiss his bride to be. Not interested at the time, Jane declined his advances. But as luck would have it, their families were friends and years later while in high school, Steve gave it another shot while vacationing with their families in Florida. This time, he succeeded, and the high school sweethearts remained together from that day forward, marrying in 1968. The couple lived in Cincinnati and then Dayton, before settling down in 1973 at their lake house near Three Rivers, where they stayed, raising their kids in a community they called home.

Jane was a talented woman, especially when it came to the arts. She studied ballet and tap, performed in musicals, and choreographed dance numbers for the local Showboat theater production. Jane found other ways to express her love for dance, becoming a Jackie Sorensen aerobics instructor. She was also interested in music and sports, playing the piano and ukulele, and enjoyed softball and bowling with friends. Jane also loved to travel, and made her way around the world with Steve, where they would find adventures together scuba diving and downhill skiing. Many summers were spent at her family’s mountain cabin in Colorado Springs, where she enjoyed hiking and horseback riding, at their cabin in Waters, MI, and on Fisher Lake where they would spend time with friends and family. An avid mushroom hunter, Jane was also a great cook.

To know Jane, is to know that she was incredibly organized. Her meticulously detailed Thanksgiving time schedule, an hours-long production followed to the minute, was legendary. She was affectionately nicknamed “MacGyver” because there wasn’t anything she couldn’t fix or improve upon. If something was worth doing, it was worth doing right, and Jane lived by that motto. If she saw you drinking a beer the wrong way – she would tell you how to do it the right way (in a glass, over ice, so it stays cold!). She loved to laugh, had a quick wit, liked a dirty joke, and knew how to have fun.

Jane was a master gift giver, but she was especially generous with her time. She spent many years volunteering on the PTA, the Three Rivers High School Sports Boosters, organizing the annual Three Rivers Airport Breakfast Fly-In, and running the St. Joseph County election. As she often said, one must “rise to the occasion,” and she would do so with exceptional care and accuracy.

Jane will be remembered especially for her sense of humor, grace, and kindness. An eternal optimist, she chose to see the good in others. She kept post-it notes with a few tenets she liked and lived by: “Conduct should be judged by its effect on happiness, not by its adherence to the rule,” and “To speak ill of others is a dishonest way of praising ourselves.” Also, “Necessity is the mother of invention,” and “Assumption is the mother of all screw ups.” She was a loving and devoted wife, mother, grandmother, daughter, sister, and friend. Her memory will live on in her family and friends who loved her.

Jane is survived by her husband of over 50 years, Steve; her children, Robert (Erin) Schauer, and Mary Jane (Kurt) Neumann; her grandchildren, Jackson, Maddox, Will, Jacob, and Anna; her siblings Robert (Barbara) Winans and Kate Winans; and her brothers and sisters-in-law, Bob (Nancy) Schauer, Andy Wisecup, Martha (David Brown) Schauer; and nieces and nephews. She was preceded in death by her brother Joseph Winans and sister-in-law Nora Lee Wisecup.

A memorial service celebrating Jane’s life will be held Sunday, September 26th, at 11 a.m. at Hohner Funeral Home, followed by a reception from 1 to 3 p.m. at The Elks Club in Three Rivers.

Donations in Jane’s memory may be directed to Three Rivers Hospice. Envelopes are available at the funeral home.