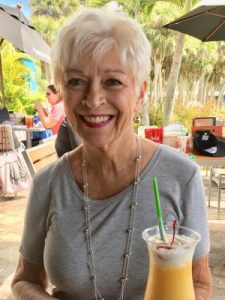 Carole Ann (Brewer) Hallgren left this world due to respiratory failure on Wednesday, October 13, 2021 in her summer hometown of Hartford, Michigan, after being a Florida resident for more than 20 years. She was born 79 years ago in Rives, Missouri, the third of six children to Jesse and Faye (Loveless) Brewer. Her parents moved the family to Lacota/Grand Junction, MI where they established roots. She married Ronald Foster in May of 1963, and they lived in Kalamazoo, raising their three children; Ronnie Foster, Stephanie (Ric) Sampson & Julie (Brian Wood) Walters.

Carole was preceded in death by her parents; Jesse & Faye Brewer; her infant brother; James Dale Brewer; and as of June 1, 2014; her second husband of 15 years; Roger Hallgren.

A 1960 graduate of Bangor High School, Carole participated in Cheerleading, Baton Twirling, Yearbook Staff and was voted Homecoming Queen. She recently attended her 61st class reunion which she regularly helped to plan. She furthered her education in Benton Harbor, obtaining a cosmetology license. She worked as a Beautician in Kalamazoo until her career ended abruptly in Dec. of 1975 in a near fatal shooting during a hold-up at Mr. Robert’s Styling Studio. Despite Carole’s injuries and limitations, she lived each day with a positive attitude, laced with humor, wit and a beautiful smile. She filled her time by volunteering at the Borgess Service League, Kalamazoo Symphony Orchestra League and attending her children’s and grandchildren’s sporting activities. She became a Kalamazoo Parliamentarian, played league tennis at West Hills Tennis Club and later played in many golf leagues in Michigan and Florida. She was a devoted mother and dedicated at least one day a week at Stephanie and Julie’s homes to spend time with her grandchildren where she passed on her passion for baking and playing board games and cards. After moving to Florida, she spent time with her son, Ronnie dining out for an occasional Sunday meal.

She loved being a resident of Florida where she had a large circle of friends. Carole loved to entertain and her guestroom was usually occupied by friends and family. She was particularly close with her stepdaughter, Linda and son-in-law, Vere who visited her Florida residence regularly. They came over daily to her summer home in Hartford to play dominoes and often brought her groceries and necessities. Carole and Roger hosted an annual St. Patrick’s Day party which everyone looked forward to. They enjoyed golfing together at the many nearby courses. Carole also had a passion for many card games as well as jigsaw and crossword puzzles. She was nicknamed “Ruby” by her friends with whom she played table shuffleboard, trivia and dominoes. Her friends described her as having an upbeat personality with a combination of social grace, beauty, kindness and a privilege to know her and call her a friend. She will be greatly missed by all who knew her.

In lieu of flowers contributions can be made to Hospice of SW Michigan. Envelopes are available at Hohner Funeral Home.