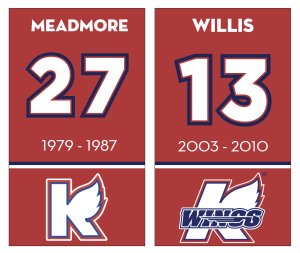 The Kalamazoo Wings held their annual media day press conference Tuesday and announced that they will be adding to their retired jersey collection this season as they will hang two more numbers in separate ceremonies for Neil Meadmore and Tyler Willis.

Meadmore is looking forward to having his number 27 hanging next to those of former K-Wings teammates.

“I was overwhelmed,” said Meadmore, who still lives in Kalamazoo and attended the press conference with his family. “To be mentioned in the same breath as Mike Wanchuk, Georges Gagnon , and my good friend Kevin Schamehorn is quite an honor. It’s very humbling to be a part of that group.”

“Neil is a trailblazer and was one of the players who paved the way for the rest of us,” said K-Wings Head Coach Nick Bootland in the press release.. “He gave us all a chance to chase our dreams. We owe a ton to players from the past. He was an impactful player and a true Kalamazoo Wings ambassador in our community.”

Willis played for the K-Wings from 2003-2010.  Like Meadmore, Willis was an instrumental part of the K-Wings 2006 Colonial Cup winning team while playing in the UHL. During his time with the team, Willis, a perennial fan-favorite, 241 points in 349 games and 1,463 penalty minutes, which is the second-most in team history.

Willis is humbled to have his number 13 retired by the organization.

“It’s such an unbelievable honor,” said Willis, who recorded a video from his home in British Columbia. “I was speechless. It’s going to be so much fun. I look forward to it. To bring my family down, my kid loves hockey and my wife is from Kalamazoo, everybody is super pumped.”

Bootland, who both played with and coached Willis in Kalamazoo, expressed his admiration for the honoree.

“Tyler is one of the best teammates I have ever played with. He is a warrior,” said Bootland. “He had everyone’s back and had the ability to get an entire opposing team off of their game. He was the most hated player by every team and fan base we played against.”

The K-Wings also announced a new colored-ice game for the upcoming season.

Just like they did back in 1982 when they dyed the ice green for St. Patrick’s Day, the K-Wings will become the first professional hockey team to host a game on rainbow-colored ice.  The promotion will be part of the annual “Hockey is for Everyone” game on January 7, 2022.

“The Kalamazoo Wings are proud to be the first team ever in professional hockey to paint the ice the colors of the rainbow,” said K-Wings General Manager Toni Will in a press release. “We are looking forward to being able to shine a light on creating an environment of togetherness no matter the race, national origin, religion, gender, disability, sexual orientation, or socio-economic status.”

The K-Wings have provided fans with several colored ice nights over the years including orange for Halloween, pink for Valentine’s Day, lavender for “Hockey Fights Cancer” night and a Kid’s Paint the Ice Night, which featured drawings from members of the K-Wings Kids Club.  They have also had blue and yellow ice.

“We are passionate about supporting diversity, equity and inclusion initiatives such as Hockey is for Everyone,”  Will continued. “In partnership with the NHL we believe we can drive positive social change and create more inclusive communities.”