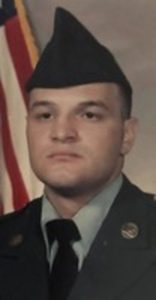 He was born October 9, 1963 in Paulding, Ohio son of Robert Paul and Phyllis K. (Barnhouse) Ganger.

Chris resided in Sturgis since 1969 coming from Paulding.

He was a graduate of Centreville High School with the class of 1982. While a student at Centreville High School he excelled in athletics especially in football and wrestling. For many years he held several school records in football and was extremely successful in wrestling qualifying for the State Finals and taking a place on the podium all four years of his career and was crowned a State Champion his sophomore year. He earned a scholarship and went on to wrestle for Ferris State University in Big Rapids.

He had been employed by Morgan Olson in Sturgis, Riblett Plastics in Middlebury, G&H Industries in Centreville and S&H RV in Las Cruces, New Mexico.

Chris was proud to have served his country in the U.S. Army Reserves for six years. He enjoyed playing golf, bowling, fishing, hunting and was an avid reader especially enjoying fantasy and sci-fi.

In accordance with his wishes cremation has taken place. The family will receive friends from 5:00 to 6:00 P.M. Wednesday at the Hackman Chapel of Hackman Family Funeral Homes in Sturgis where a memorial service celebrating the life of Christopher Ganger will immediately follow the visitation at 6:00 P.M. Private burial of the ashes will take place at Oak Lawn Cemetery in Sturgis at a later date.