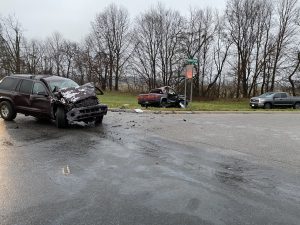 Three people, including a 5-year-old boy, were injured in a two-vehicle collision Monday in Cass County’s Porter Township.

Sheriff Richard Behnke said deputies were called at 4:30 p.m. to the intersection of U.S. 12 and Baldwin Prairie Road.

Investigators said 30-year-old Crystal Adkins of White Pigeon was driving east on U.S. 12 when a southbound vehicle on Baldwin Prairie Road, driven by Robert Morrison, age 86, of Vandalia, pulled out in front of Adkins’ vehicle and the two cars collided.

Morrsion, Adkins and her 5-year-old son were taken to Elkhart General Hospital.

Seat belts and child-safety seats were in use at the time of the crash.