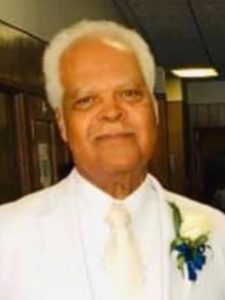 He was born February 27, 1940 in Rydersville, Ala. to Thomas and Christina (Harville) Shelton, and graduated from Three Rivers High School with the Class of 1960.

He worked in research and development as a biotechnician for the Upjohn Company, later Pfizer, from where he retired in 2006.

George was a loving husband, father, and brother who always put God first.

He held the distinction of being the longest member at Bethel Baptist Church, where he served as chairman of the deacons, treasurer and usher. He was especially honored when the church named him “Father of the Year.”

George was preceded in death by his parents; brother, Thomas Shelton; and sisters, Velma Whitten and Linda Patterson.

Visitation will be held Saturday, March 26, 2022 at 11:00 a.m. at Bethel Baptist Church, 17852 S. River Rd., Three Rivers. A funeral service will follow at noon at the church, with Pastor Terry Cropper officiating. He will be laid to rest in Riverside Cemetery.

Donations in George’s memory may be directed to Bethel Baptist Church or Three Rivers Hospice. Envelopes are available at Hohner Funeral Home, 1004 Arnold St., Three Rivers, MI 49093 in care of his arrangements.