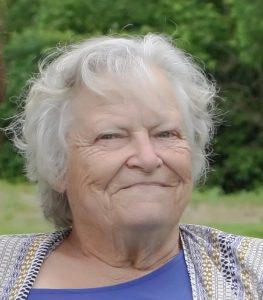 Mona J. Jacobs, age 87, of Mendon, died Friday, March 25, 2022 at her home. She was born in Springfield, TN on June 12, 1934 the daughter of Ired K. and Eva (Crawford) Jackson. She moved to Michigan at the age of 15, and settled in the Sturgis-Centreville area. Her first marriage to Richard Sanford, Sr. ended in divorce. She was later married to Donald Ray Jacobs; he passed away in 1985. Mona worked at Newport News in Sturgis, and for many years provided transportation to the Amish community. She enjoyed sewing, flower gardening, bird-watching, and hunting for bargains at garage sales.

Mona is survived by five children, Richard Sanford of Constantine, Ron (Peggy) Sanford of Mendon, Debra Sanford of Sturgis, Darlene Trine of Centreville, and Madonna Smallwood of Reedsburg, WI; twenty grandchildren; sixty-two great-grandchildren; and seven great-great-grandchildren; a brother, Bill (Lanette) Jackson of Osceola, IN; and many nieces and nephews; She was preceded in death by her parents; a daughter, Jewel Hollis; five sisters, Margaret, Alma, Judy, Peggy, and Dorothy; and five brothers, Howard, Ired, Earl, Terry, and Ron.

The family will receive friends from noon to 2 pm Tuesday, March 29, 2022 at the Eickhoff Funeral Home in Mendon. Funeral services will begin at 2 pm Tuesday at the funeral home with Rev. David Grimm, Pastor of Creators’ Praise Ministries officiating. Cremation will follow services. Memorial donations may be directed to a charity one one’s choice. Memories and condolences may be shared at www. eickhofffuneralhome.com