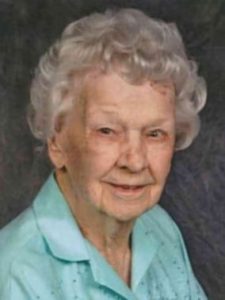 Mary Eileen (Ryan) Miholer, age 99, of Three Rivers, passed away on Wednesday, April 20, 2022. Eileen was born in Jackson, Michigan on September 1, 1922, the daughter of William and Ethel (Damaron) Ryan. The family moved to Three Rivers in 1936.

Eileen graduated from Three Rivers High School with the class of 1940. On April 16, 1942 she was united in marriage with her high school sweetheart Harold Lyle Miholer at Immaculate Conception Church. Harold preceded Eileen in death on May 9, 2004. After their family was raised, Eileen enjoyed 21 years service as a secretary at her alma mater, Three Rivers High School.

The family will receive friends from 2:00 p.m. until 4:00 p.m. on Sunday, April 24, 2022 at the Hohner Funeral Home with Rosary Services held at 3:30 p.m. Mass of Christian Burial will be held at 11:00 a.m. on Monday, April 25, 2022 at the Immaculate Conception Catholic Church with Fr. R. Mathias as celebrant. Interment will be held in Riverside Cemetery.

Memorial donations may be made to Immaculate Conception Catholic Church Educational Trust Fund. Envelopes are available at Hohner Funeral Home in care of her arrangements.