The roster building continues for the Kalamazoo Wings as they prepare for the 2022-23 season, which kicks off on Saturday, October 22 at Wings Event Center.

In a move that will surely delight fans, two popular players from last season will be returning to the ice as will an intriguing newcomer. 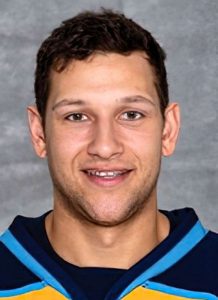 Forward Anthony Collins made quite a splash for the K-Wings after being acquired from the Norfolk Admirals in March last season.  In his 20 games with the K-Wings, Collins scored one goal, added two assists and had 42 penalty minutes.

Collins, who will be playing in his eleventh season, is known for his physical presence on the ice, something that K-Wings fans quickly admired.

“I have always enjoyed the physical side of the game,” Collins said. “Whether that be with a big hit, answering the bell for a teammate or giving the boys a spark. I truly believe those things can have a huge impact on a hockey game to help your team win.”

With over 400 ECHL games in his pocket, Collins said he knows the league “inside and out”, which is a boon for up and coming players.

“I enjoy being a book of knowledge for the younger guys entering the league, to help them feel comfortable and grow their game,” Collins said.

Although he has played in several different cities, it didn’t take Collins long to figure out that Kalamazoo was a special place.

“After my first game I felt the energy and passion from the fans,” Collins said.  “My family and I were welcomed with open arms, I knew that night this is where I was supposed to be.”

While Collins is a tough guy on the ice, he says the opposite is true off the ice.

“Surprisingly from my actions on the ice, off the ice I am a very laid back, go with the flow guy,” Collins said.

“Anthony is the ultimate teammate and a great leader,” said Bootland in a press release. “His positive energy and enthusiasm are extremely contiguous. Anthony’s also a tough winger, who just plays his reliable game night in and night out.”

“Anytime you hear those things from such a well rounded and respected coach like Nick Bootland it is an honor,” Collins said. “ I truly try to play the game hard but with integrity and always put my teammates first.”

Also returning to the K-Wings is defenseman Brenden Miller.

“Brenden is a Top-5 defensemen in the ECHL,” said Bootland in a press release. “He’s a minute muncher and is as old school as they come. He blocks shots, plays hard every night and is a top pro for our young players to follow.”

Rounding out the signings is rookie forward Bair Gendunov. 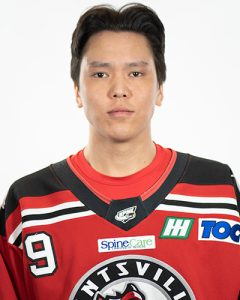 He also played 11 games with the Cincinnati Cyclones of the ECHL last season.

Gendunov said his path to Kalamazoo started with a few phones with Bootland and Assistant Coach, Joel Martin.

“I had some very good conversations and both parties were happy with what they heard,” Gendunov said.  “ I’m very honored to receive this opportunity and will do anything I can to help this team win.”

On the ice, Gendunov hopes to be an offensive force.

“I have confidence in my offensive abilities and will try and help this team by bringing more goals and creating chances for my teammates in any way that I can,” Gendunov said.

While unfamiliar with Kalamazoo, Gendunov is excited to see what the city has to offer once he gets to town.  .

“I’ve only ever been to a handful of places in the USA,” Gendunov said. “One of my teammates last year was from Kalamazoo and he says he loves living there during the summers. I look forward to exploring the city and seeing/meeting all of our amazing fans.”