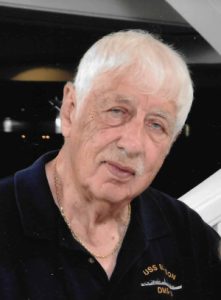 Ron earned his bachelor of science degree at Western Michigan University: a triple major in physics, chemistry and mathematics, and a minor in history. He followed that with a master’s degree in electrical engineering at Notre Dame.

He went on to train generations of students as a teacher for 26 years at Three Rivers High School, and for 23 years at Kalamazoo Valley Community College. In Three Rivers, he was chair of the math and science departments and developed the honors math program and the original advanced placement program for calculus and chemistry. He was very involved in the National Honor Society and various other activities.

He obtained the rank of 1st class petty officer in the United States Navy. He served in the Korean War primarily on the DMS Ellyson as a boiler-tender, sharpshooter and 40mm gunner.

He had special pleasure in sharing his knowledge and stories with everyone, and particularly with his two grandchildren. He shared with them his love of math and science and how to make aunt Sophie’s cookies.

Remaining to cherish Ron’s memory are his wife, Anne Riopel; son, John (Jen) Riopel; grandchildren, Riley and Jaxon; many beloved brothers and sisters-in-law, nieces and nephews, great-nieces and -nephews, and many close friends.

He was preceded in death by sister Dolores (and Roman) Skinner along with his parents.

A Rosary will be recited Saturday, December 10, 2022 at 10:30 a.m. at Immaculate Conception Catholic Church, 645 S. Douglas Ave., Three Rivers, followed by a funeral mass at 11:00 a.m. with Fr. R. Mathias as celebrant and Father William J Jacobs as concelebrant. A celebration of Ron’s life will follow the mass with an immediate luncheon in the church basement. Those wishing to attend interment at Riverside Cemetery following the luncheon are welcome.

Donations in Ron’s memory may be directed to Three Rivers Little League (for a scholarship to assist young people who might otherwise be unable to participate), V.F.W. Post #3019, or American Legion Post #170. Envelopes are available at and may be sent to Hohner Funeral Home, 1004 Arnold St., Three Rivers.