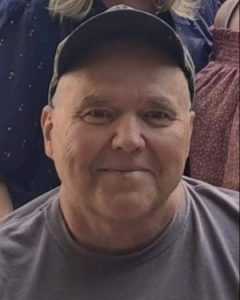 Gregory Edward Lusk, age 68, of Three Rivers, passed away on Wednesday, December 7, 2022, at the home he proudly and lovingly built with friends and family on Profile Lake surrounded by family. He was born May 8, 1954, in West Virginia, the eldest child of Garland and Vacie (Walker) Lusk and the family later relocated to Constantine, where he grew up.

On January 27, 1973, Greg married the love of his life, Pamela Coney in Constantine. They were both very proud and excited to be celebrating their Golden Anniversary in 2023. Greg went on to join the Army National Guard and was a proud Veteran. He was also a long-standing member of the local Jaycee’s and enjoyed community fundraising events and especially the yearly haunted house.

He retired from the Johnson Corporation where he made life-long friends with whom the families would enjoy camping trips and mushroom hunting in Mesick, MI. He loved spending time outdoors hunting, fishing and golfing and always looked forward to his annual hunting trip with the guys. If you knew Greg, you know that no one was ever a stranger, and he was always at the ready with a joke.

In accordance with Greg’s wishes cremation has taken place and a public service will be held on a later date. Please check back for additional information.

While at www.amsfuneralhomes.com please take time to sign Greg’s guestbook and/or share a memory with his family.