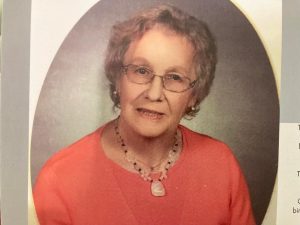 Marie Coomer died on Thursday, March 24, 2022 at the age of 96 in Port Charlotte, FL.  She was born on February 16, 1926 at Woodburn, Indiana. Her parents are Carl and Emma (Messman) Knoblauch. Marie is the seventh of their ten children (Harold, Anita, Edith, Herman, Mildred, Otto, Marie, Norma, Evelyn, Erwin). Living today are her sister Norma Jacobs and her brother Erwin (Marilyn) Knoblauch; also, sister-in-law Betty Doctor. She went to the Lutheran School 1-8 grades and graduated from Woodburn Public School in 1944.

Marie and Darrel were extremely busy those first 20 years of marriage providing for their family and developing their farm business. They purchased a farm in Mendon, and moved there in the fall of 1956. It was a huge move for Marie, 100 miles from extended family. They built a ranch style home, white with red brick front and red roof to go with the red barn.

With 5 children in school, Marie became involved in school activities. She was in PTA and gave leadership there. She headed the Band Parents fund raisers for new uniforms. 4-H leader in sewing, teaching her daughters to sew and create beautiful garments. She assisted in the Dairy Projects, especially during the county fair. Living on the farm we all took turns with chores, Mom organized us. Marie joined the local Women’s Club Society who sponsored a number of community events and improvements. She gave many years of leadership and was a delegate to State Conventions. She was also active in Lutheran Church Ladies Aid and Altar Guild.

Marie and Darrel encouraged their children to study and work hard thus empowering them to go to college and all 5 graduated. Marie took up tennis in her 40s, she was good and often won her matches. She encouraged us to learn the game some of us did better than others. She played vigorous tennis to 80 years old. She and Darrel enjoyed dancing; they were active in formal club square and round dancing, wearing lovely costumes. They traveled to several national events and one in London. She enjoyed playing cards, a family ritual.

She purchased a condo in Oldsmar, Florida around her 61th birthday. She, Darrel and many in the extended family enjoyed many winter days there. She joined the Racket Club and the Newcomers Group. They built a community of friends there, meeting most days at the pool to play cards and chat; going out for dinner together.

Marie and Darrel worked as partners to build a farm in St. Joseph County, MI. They were generous with their family. Marie was a bright, strong, compassionate loving woman. She stayed connected with her family with visits, phone calls and birthday cards. She was blessed with good health and ambitious energy most of her life. She is loved and will be missed. She lived her last four years at Lexington Manor, Port Charlotte, Florida near Elaine and her family.

A funeral service will be held on April 2 at 11am at the Eickhoff Funeral Home in Mendon with Rev. David Grimm officiating. Also, a Memorial Time of sharing is being planned the weekend of June 10-12, 2022 at the Mendon Farm. Memories and condolences may be expressed to the family at eickhofffuneralhome.com